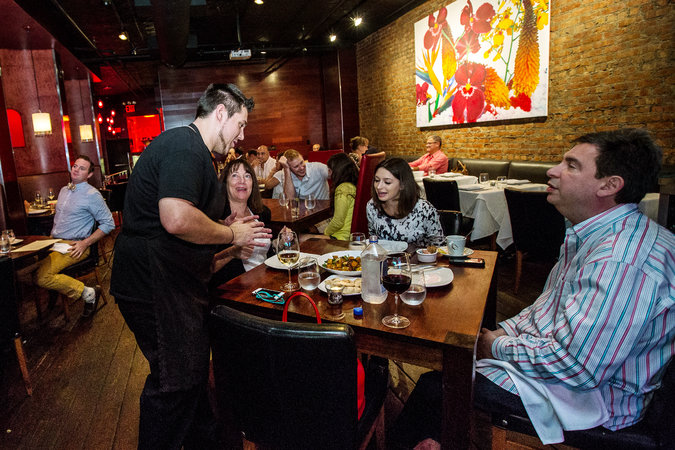 When Michael Ginor opened Lola in Great Neck in 2009, Spanish tapas were featured. By the time I visited, about a year later, the restaurant was serving New American cuisine. In May, Lola closed briefly and reopened with a Mediterranean menu that focuses on Middle Eastern and North African dishes.

For those averse to change, fear not: The food is in good hands. Mr. Ginor, who is both owner and executive chef, is an award-winning chef, a food writer, a cookbook author and an occasional television host. His chef de cuisine, Lenny Messina, helped update the menu and handles operations when Mr. Ginor is traveling.

The restaurant looks much as it did in the past: It’s a sophisticated spot with a big-city air, featuring a red tinted bar illuminated from below, a brick wall with a large painting of tropical flowers, and a wall of semicircular leather booths. In the center of the room are tables surrounded by impressive, high-backed, red leather chairs.

Nearly everything is made in-house, and I mean everything, from the warm, puffy, recently grilled pita bread at the beginning of the meal to the ice creams and sorbets with exotic flavors like roasted fig, charred pita and lemon-fennel at the end. In between are four types of hummus made daily; taramosalata with house-cured fish roe, and a number of dishes featuring homemade malawach (Yemenite pan-fried dough).

One European holdover from the old menu is the foie gras appetizer. Much to Lola’s good fortune, Mr. Ginor is also a co-owner of Hudson Valley Foie Gras, a farm in Ferndale, N.Y. I’ve never tasted better foie gras than the melt-in-your-mouth version here, accented with a side of date-honey-glazed butternut squash and toasted pistachios.

An economical and delicious way to start the meal is with a few mezes. An assortment of five for $24 was a feast for our table of four. My favorite was the green eggplant salad: fire-roasted eggplant tossed with scallions, tahini and herbs. Other standouts were heirloom carrots with Moroccan spices, yogurt and mint; roasted cauliflower salad; a smooth, smoky baba ghanouj; and of course, the excellent taramosalata. My only criticism is that these dishes, made for sharing, arrived with no serving spoons.

Another category on the menu is small plates, suitable as either appetizers or entrees. I tried the lamb malawach with its crisp crust, spiced lamb and caramelized onions and thought it compared favorably to pizza. Another delicious small plate was the fattoush salad, which I would choose for a light entree. It was a delicious mix of chopped romaine, tomatoes, cucumbers, onions, mint, parsley and cubes of marinated feta, seasoned with ground sumac (a Middle Eastern spice), and garnished with pomegranate seeds. The salad was served with crisp za’atar pita that had been dried, marinated in olive oil and spices, then baked till crisp.

The moist and flaky whole grilled branzino, served on the bone or filleted, was my favorite entree. Also fine was a plate of lamb meatballs (kofta) with tomato jam, mint and cilantro yogurt and malawach. Even a dish that sounded ordinary — organic chicken schnitzel — stood out: a crisp cutlet atop mashed potatoes sparked by lemon, with ribbons of pickled carrots and harissa aioli on top.

The best dessert was the halvah Napoleon with light, crisp phyllo, a light halvah mousse and a topper of the sesame seed confection, shredded. The flourless honey-almond cake was moist and tasty and enhanced by roasted fig and organic honey ice cream. Diners may order a flight of ice creams and sorbets: four small scoops of the flavors on hand that night.

The food at Lola is exotic and exciting but never weird or off-putting. You’ll enjoy it.

THE SPACE Sophisticated storefront with 65 seats. Wheelchair accessible. The staff is helpful and attentive. The owner and the chef de cuisine often visit the dining room to chat with customers.

THE CROWD Couples and small groups. Some children.