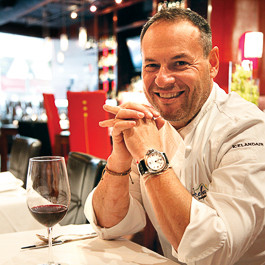 Chef – Owner Michael Ginor, is no stranger to the hospitality industry; Michael, along with Chef Ken Oringer launched Boston’s La Verdad, a casual Mexican Taqueria and restaurant, which was awarded “The Best Casual Mexican Restaurant in the US” by Bon Appetit Magazine and “One of the best 100 Restaurant in the US” by Food and Wine Magazine.  In July 2007 Michael opened TLV in Great Neck, NY, a Mediterranean restaurant which garnished critical acclaim and received three stars from Newsday, as well as “best new restaurant (Long Island ) 2008’.  In September 2009 Michael opened “LOLA”, hailed as one of Long Island’s best restaurants, receiving 3 ½ stars from Newsday, and described as “brilliant, volatile…shooting stars”. Along with LOLA, Michael is Co-Owner of Hudson Valley Foie Gras, in Ferndale, NY.

Hudson Valley Foie Gras in one of the largest producers of organic chicken, duck, and foie gras in the US has received the 1993 Gold Merit Award from Chefs in America and the 1996 Award for Excellence from The James Beard Foundation. In 1996, Hudson Valley received the Five Star Diamond Award from the American Academy of Hospitality Sciences and the 1998 Award of Excellence from the American Tasting Institute.

Michael has served as Honorary Event Chairman for the Spinazzola Foundation and the Cystic Fibrosis Fund. In May 1996, Michael received the first Olive Branch Award from the Jewish National Fund for humanitarian and professional achievements. He was honored with the 1997 Angel Award from The James Beard Foundation for dedication, contribution and foresight and in 1998, Michael received the American 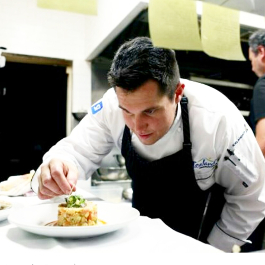 Executive Chef Lenny Messina has been persuing his love for cooking since a very young age. With influince from his father; Pastry Chef Lenny Messina SR, He began his professional career at Barry Tech BOCES where he attended their award winning culinary program. After BOCES, Lenny went on to Graduate from The State of New York at Delhi with a Bachelors in Business Administration focused in Hospitality Management and Culinary Arts. Lenny has been awarded accolades from various notable organizations such as: The New York Guild of Baking and Pastry, American Culinary Federation, Societe Culinaire Philanthropique and Skills USA.

In 2012 Lenny and his team went on to win the New York State, Northeast Region, and National Championship for the American Culinary Federation which jumpstarted his career and further intensified his passion for food. Lenny has worked for Various notable Chefs throughout New York, before finding his home at LOLA.